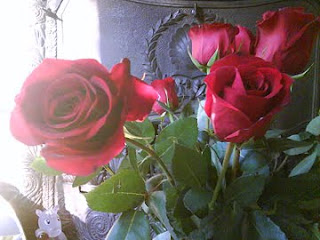 At 7:15 am this morning, when I'd just stumbled down the stairs, I saw a dozen red roses in a vase in front of the fireplace.

I had no idea where they came from, and I asked Lynette, who was hurrying to get ready for an early meeting at school.

She said she'd brought them home last night for me, but I hadn't noticed because I was so caught up in doing my taxes... adding up the faded numbers off mounds of crumpled, and torn receipts saved from the past year. I'd been working on it all day, and with an accountant appointment scheduled in just over an hr, and I wasn't sure I'd be done in time.

I was crazy scrambling.

I felt pretty stupid this morning... but I love red roses. And I **think??** Lynette's forgiven me? well, she acted as if she did.

(She's left for that meeting now.)

I love you Lynnie ;)

My cat Eliza was followed me around too.... Everywhere!

...Wouldn't move more than a few feet away.

She was being very cuddly. (She's off sleeping somewhere now I think.)

She's from the 'old guard' kitties. The group we first got... one of the first stray's we took in, and now the last of that group.

3 days ago we found out that she has cancer, and only has a few months to live.

But she's happy now now... though dealing with a slowly draining ear, and some nerve damage effecting the left side of her head, (It's inner ear cancer.. never knew there was such a thing.)

It makes me pretty sad... but I want her to feel loved for as long as possible.

My dreams have now shifted to not being on the move... they usually lag about 2 weeks behind whatever I'm doing, and it's been a little over 2 weeks since getting back from tour.

Last night I dreamt she was attempting to drop down a square hole broken through the floor of some 2 story carriage house we'd evidently fixed up in my dream world. I kept trying to stop her, grabbing her tail just as she was slipping through, and pulling her back onto the floor next to the whole. I knew she's be really hurt if she dropped that far to the cement 1st floor.

She'd look dissapointed... nose around... then she'd start at it again, giving it another try.

-- Lynette is walking more now without using her crutches. her broken ankle from her car accident while I was on tour, is slowly healing... but not fast enough for her. She did well getting out the door to her meeting.

These random thoughts have me thinking about crossing boundaries.

- When I was 19, I saw some trans Male to Females on the old 'Donahue Show' one afternoon on my little B

black and white portable TV in my 1st Street, downtown Duluth Brownstone 2nd floor condemned apartment. (I'd gotten it for $125.00 a month through a friend who'd worked out a deal with the landlord.)

The apartment was a construction mess when I'd moved in, but that was part of the deal... I'd fixed it up since..

This was he first time I could put a name on how I felt gender-wise. Up until then I thought I was the only person in the world dealing with my 'gender frustration.'

I eventually crossed that boundary, but in my own unique way.

- Years later, during the first line-up era of "All The Pretty Horses,' (Bill and Ed and I,) we thought we'd get rich off my being public about being transgender... This was the early 90's. It never happened.... the getting rich part. But we'd broken the rules. Crossed the line.

That time in Rock and Roll didn't have room for Trans people... (not sure it's much different now.)

- When my father died, I was there. I saw him die. His eyes rolling back... muscles straining, trying to make some sort of noise...

That was 17 years ago. I still see him now in my dreams, sometimes as a young man, sometimes as he was before he died. And we talk about life now.

I imagine him having crossed the line of life.

- My Mom remembers it differently.

She's now dealing with memory loss... Last month, my sister told my sister that my aunt was vacationing in Cuba. That being the reason she hadn't seen her for so long, even though they were both at the neighborhood senior community lunch. the day before.

She remembers my Dad drifting off easily, when he died. (she was there too.)

She's crossed the boundary of independence.

She'd always been one to strike out on her own, tackling life on her own terms.

I imagine it's hard for her to have to be dealing with these physical and mental limitations now.

- In NY while ATPH was touring there early on, I met Jayne County... one of, if not the first, trans Male to Female rock performer to publicly acknowledge her transgenderism... she'd even transitioned mid musical career, starting out as Wayne County.

I kept running into her whenever I was out in NY... saw her DJ set at 'Otto's Shrunken Head' tiki lounge.

At a small 'Trans-Party gathered in the back room of a bar just down the street from the old 'Meow Mix.'

At another bar somewhere in lower Manhattan where we were meeting mutual friends for an early evening drink.

We'd talk and catch up on just daily stuff... She'd mentioned her desire to move back to her hometown roots down south. I don't know if she ever did, as our mutual friends have now drifted away, and I no longer see her out.

Her performances were raw and jarring.... coming directly from the early, messy, 'fuck the audience' Punk days. At odds (as is usually the case with performers,) with the daily persona I'd gotten to know.

Seeing her perform towards the end of her career, and also knowing the work she'd done as a young person... she did, and I'm sure, continues to cross multiple boundaries.

- I had a 2 hr long conversation with a closeted trans-friend of mine. Someone who passes flawlessly as male, Having crossed that boundary quite successfully long ago, but now, life is pulling him towards having to deal with coming out... A whole other boundary. But he doesn't want to. He's content and happy leaving that personal information out of his life.

We talked about these feelings, the craziness of unpredictability, and how to deal with the unexpected.

We've broken ties, (Her decision,) because of an article written about the band's history, and it's many line-up changes. Her birth name having been noted in a sensational way by the article's author. Her anger towards me stems from a feeling that I shouldn't have let that happen, and should've apologized to her for using her birth name when I acknowledged her previous musical work. (this, I also I did all the other past band mates,) And since she was known in the musical circles as her previous male self, and wasn't shy about being open about her own transgenderism, I didn't think twice about giving her the same props I'd given everyone else.

She'd blamed me for the author's use of highlighting her name, and took the article as a personal insult.

So, here, with this event, many lines and boundaries have been crossed.

The morning of the day I left on this last tour, Lynette was sleeping, the morning sun was poring in, Eliza (our 'old guard' kitty,) was awake, purring, and following me down for breakfast.

I was thinking about how perfect things were right at that very moment.

I knew everything would change.. time never stopping.

I didn't want to let go of it.

I stood still at the top of the stairs looking back at Lynette, the sun on the floor, and Eliza.

Then I went down to make the morning coffee.

There is something to be said for your candid ability to express how you feel. I like your fearless approach.

thanks - sorry to hear about Eliza...she is my favorite :)